A book by Maurice Sadoulet on matter and mind … 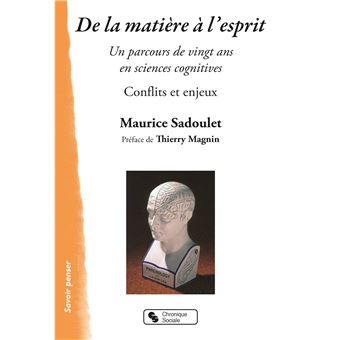 Maurice Sadoulet –  De la matière à l’esprit – Un parcours de vingt ans en sciences cognitives – Conflits et enjeux – Editions Chronique Sociale.
This book is an enlightening testimony of a fascinating research on one of the major questions of our time : the link between matter and spirit, between body and mind, between brain and consciousness. The author begins by reminding us of the main lines of what we know today about the appearance and development of cognitive capacities in animals and humans throughout evolution, with a definite pedagogical concern.

From the brain of animals to human consciousness, we are now embarked on the prodigious adventure of the living and the mind ! This evolution leads the author to specify the nature of the relations between matter and spirit, well beyond the largely obsolete dualist visions. The now classic notion ” of emergence ” is thus highlighted and commented. The question of the evolution between chance and project, which has already been the subject of much discussion, is of course approached from the point of view of the novelties brought by neuroscience. At the heart of a highly conflicting question between materialists and spiritualists, here is the opportunity that the author seizes to express his position, well argued and often audacious. In a certain way, he expresses, in his own way, a vision of man’s responsibility in creation, which is partly in line with that of Teilhard de Chardin. This clear presentation of a well-documented panorama of cognitive science today allows us to avoid getting bogged down in the maze of scientific controversies. On the contrary, our minds are awake to the new developments of today’s research on the human brain and its prodigious capacities.

Maurice Sadoulet is an engineer and has participated since the beginning in the interdisciplinary group Lyon-Grenoble ” Sciences et Conscience ” of the Blaise Pascal Network.

This book is the result of his personal research and was originally written for his grandchildren to express his questions and convictions on the subject, including those concerning religion and faith. According to his wishes, it was published by his children after his death in March 2015. It is intended for all those who wish to have a presentation of the questions posed by neuroscience today, without specialized language. 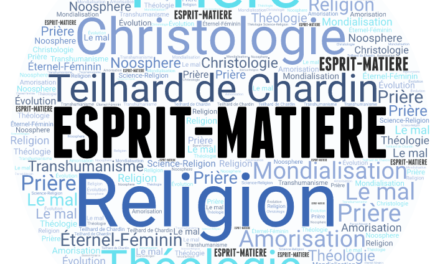 An “Informed” Nature – Hymn to matter

Spirit and Matter according to Teilhard de Chardin

From Claudel to Teilhard de Chardin