One publication for “Saying the complexity of the world …” 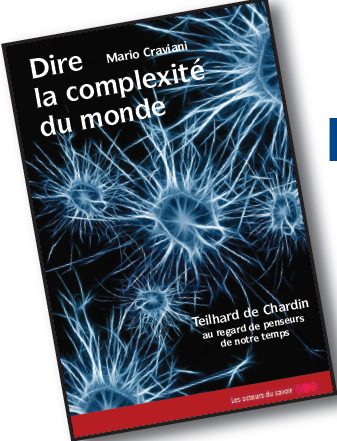 Carried by the structuring thought of Pierre Teilhard de Chardin, this book gathers a set of texts drawn from multiple authors. Judiciously the author brings in different scientists or philosophers to complete or discuss the views expressed by Teilhard.

The arrangement of these texts and the comments made by the author lead us to reconsider our understanding of the world and the way we can apprehend its future. Of course, the first theme addressed concerns the discovery of Evolution, a theory at the heart of Teilhard de Chardin’s thought, and we understand that the function of God and his representation in what becomes “Sacred Evolution” must be completely rethought. It is in this sense that Teilhard introduces a new vision of Christ, no longer redemptive but a driving force in this cosmological evolution of which he becomes the incarnation. The author concludes these reflections by suggesting a meaning to human work, to human suffering and invites us to venture towards charity, goodness, that is to say, what is perhaps the foundation of the human soul.

The author :  Born in 1940 in a small village in Italy, in Salsomaggiore Terme, Mario Craviari spent his
childhood on the family farm.
Wishing to learn French, he then settled in Col de Villefranche (Villefranche s/mer) where his
uncle ran a grocery store. Emile Chonavey, parish priest of the Col de Villefranche, introduced him to the
Professor Jean Onimus, a great humanist, to help him understand the thought of Pierre Teilhard de
Chardin and expand his research on the origin and purpose of man. His book is the result of these fifty years of reading.

To order this book from Editions Saint Léger