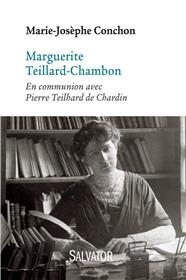 The result of several years of painstaking work, this biography of Marguerite Teillard-Chambon, also known under the pen name of Claude Aragonnès, fills an immense void.

She was a student of Bergson, an associate professor of literature, and a woman of exceptional culture. She was also an active campaigner for the education of young girls and for women’s right to vote. Cousin of Pierre Teilhard de Chardin, she was also his faithful correspondent throughout his life and contributed to the maturation of his thought during the ordeal of the Great War.

This book allows us to participate closely in the lives of these two great committed Christians of the early 20th century.