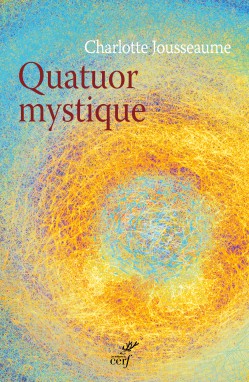 What do they have in common?“They are great listeners.“After “Le Silence est ma joie” (ed. Albin Michel, 2010), where Charlotte JOUSSEAUME delivered her spiritual experience as a woman, the writer wanted to look at “male prayer”. And it is men of silence that she has chosen.

“
I wanted to enter with them in the intimacy of a strong moment of their life
.”

Pierre Teilhard de Chardin,  the Jesuit who “literally listened to the earth and the universe”.

Maurice Zundel, the theologian who “listened until there was only silence”.

Silouane of Athos, the one who “listened to the invisible on Mount Athos”.

John of the Cross, that “great poet” who continues to inspire beyond the Christian religion.

Four men, some of whom are largely unknown today, but all of whom “play an essential role in today’s spirituality” , considers Charlotte Jousseaume. In her book, she offers a very personal interpretation of their spirituality.“I wanted to enter with them into the intimacy of a strong moment in their lives.“

Listen to the interview of Charlotte JOUSSEAUME on RCF