Publication of a new book … 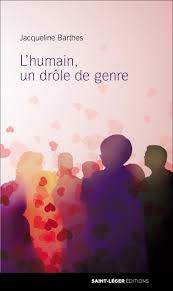 L’humain,un drôle de genre – Love and do what you want

This book is a quest. It makes us participate in a research. Trying to understand what inhabits us, and even makes us live, we human beings. How to understand this expectation that we perceive in us? This call to go beyond ourselves? More than that: how can we justify the existence of such a call within us? A call that seems to lead us to such a great distance from our biological status of being of matter. These interrogations lead Jacqueline Barthes to engage in a real journey.

A journey that, starting from a look at man emerging from the evolution of the universe, sees him recognizing himself as part of the same whole: humanity. The same humanity expressed in two modes: man and woman. Two modes subject to an obvious reciprocal attraction. An attraction generating a desire. Desire that can open a path leading to true Love. The power of impact of such Love on our beings appears then as a key to understand the human being. It is then that Jacqueline Barthes will stop on the astonishing sentence of Pierre Teilhard de Chardin: “It is a Love which physically builds the Universe”. To then question this point of view in a critical way. To see this thought intersect with those of Jean-Luc Marion, François Cheng, Maurice Zundel… And to see finally impose the fact that the man is fundamentally referred to the Love. Love is its first necessity of life. His greatest need, beyond even food or air to breathe. It is Love that makes him live.

The author
Jacqueline Barthes is a graduate of the École Supérieure d’Électricité and the Institut d’Administration des Entreprises de Paris, and has a degree in theology (Institut Catholique de Paris). She has pursued a career as an engineer and a career as a mother with the same passion. Questioned by our human condition, she has always been inhabited by the desire to better understand what this means and implies for us.
First, in 2013, Jacqueline Barthes had stopped on the mystery of the feminine. This led to the publication of a book “Le féminin, un drôle de genre”. This book led to her being welcomed at the Vatican in the Pontifical Council for the Laity. Today, she proposes to approach again with her the mystery that we are to ourselves, this time focusing on a reflection on the fact of being simply “a Human”. And it’s this book: “L’humain, un drôle de genre”.