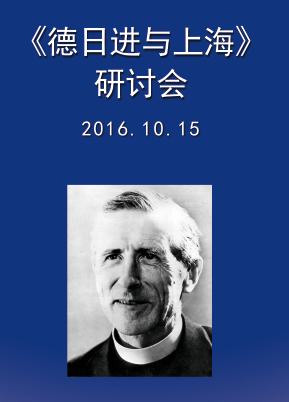 The symposium ” Teilhard and Shanghai ” was successfully held in Shanghai on October 15, 2016

Following in the footsteps of the 2014 Beijing Colloquium and the 2015 Shara Ousso Gol Colloquium, co-organized by the Mateo Ricci & Xu Guangqi Center, Fudan University, the Institute of Religious Studies, the Academy of Social Sciences, the Association of Chinese Teilhard Friends in the Making, the Zi Ka Wei Center, and the Shanghai Library, the colloquium ” Teilhard & Shanghai ” was successfully held on October 15 in Shanghai.

Pierre Teilhard de Chardin was very close to Shanghai. It was in this cosmopolitan city that he first set foot on Chinese soil in May 1923. During the Second World War, he made several stays there. Her sister Françoise lived there from 1909 to 1911 as Sister Superior of the order of ” Petites sœurs des Pauvres “.

About fifty people from different backgrounds gathered to talk about the presence of Teilhard and his sister Françoise in Shanghai.

With many anecdotes, Professor Li Tiangang has succeeded in reviving the presence of the Jesuits in the Zi ka wei neighborhoods and their contribution to the development of Shanghai through their various works : universities, libraries, weather observatory, art workshops, etc.

Alex Wang evoked the life of Françoise Teilhard de Chardin in this city that she had loved so much. In her letter to her brother, she had written in early 1911 ” Don’t forget, and I want you to do so, to ask Our Lord, at your first Mass, to take me in all my glory and keep me in China until my last day. “She died there and was buried due to complications from smallpox (the name given to smallpox at the time).

The saga of the book ” The Divine Environment “, as recounted by Professor Wang Haiyan, attracted the full attention of the audience. From the first version to the publication, the eventful history of this work has reflected the life of Teilhard.

With the help of a series of historical photos, Ms. Chen Mi has succeeded in vividly describing the circle of Teilhard’s international and Chinese friends in China, with whom he had deep friendships, among whom we can mention V.T. Ting and W.H. Wong.

Through his intervention ” The small history and the big history : Teilhard’s angle”, Professor Yan Kejia underlined the relevance and the fruitfulness of Teilhard’s approach by inserting the human history in that of the universe.

Mr.Guo Jianwei, researcher and former director of the Institute of Vertebrate Paleontology and Paleoanthropology, shared with the audience his reading of Teilhard’s major work ” The human phenomenon “. For him, Teilhard was the prophet, emphasizing the evolution of life to the spirit through the successive stages including man.

A lively round table discussion followed the screening of the documentary ” Teilhard et la Chine ” produced by Benoît Vermander. The panelists underlined the relevance of Teilhard’s thought in China to the quest for meaning of the younger generation.

The visit to the Zi Ka Wei district provided participants with the opportunity to discover thefirst weather station in the Far East at the time, the site of the Aurora University and the Jesuit library, still intact but closed to the public.

This colloquium was an enriching meeting for the Friends of Teilhard. As for the young participants in Shanghai, they were pleasantly surprised to discover Teilhard, a thinker so close to them and resolved to start reading Teilhard, just like those in other cities such as Beijing, Nanjing, Kunming, and Chengdu where conferences on this great friend of China were organized.

Report in English and photos in this file